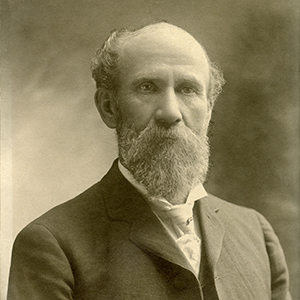 Louis Frederick Moench, christened Ludwig, was born on July 29, 1846 to Johann Christian and Elisabeth Barbara Hess Moench in Neuffen Wurtemberg, Germany. He was the thirteenth of sixteen children, and one of eight children to make it to adulthood. His father emigrated to America in 1852, and, after his mother's death in Germany in 1856, ten year old Louis emigrated to the United States with several of his siblings. He lived in Taylor's Hollow, New York until the age of seventeen. Trained in tanning he moved to Chicago. While working as a tanner he hired a private teacher at night to finish his education, which had stopped at the age of thirteen. He eventually graduated from Bryant and Stratton College with honors. In 1866, Louis and a fellow college gradaute travelled to California to be college teachers. While stopped in Utah their supplies were destroyed. Louis converted to the Church of Jesus Christ of Latter-Day Saints and made Salt Lake City his home. From 1868-1871 Moench taught in LDS church schoolas as an instructor in German, penmanship, and drawing at the University of Deseret (University of Utah). He was involved in starting LDS schools in various communities in Utah, Arizona, and Colorado. In 1872, Moench moved to Ogden where he served as a principal and superintendent of schools for thirty years in Weber County. He served as a missionary in Switzerland from 1884-1888. He was the principal of Weber Academy from 1888-1892 and 1894-1902. He was a supporting member of the Weber Board of Trustees until his death in 1916.  He had four wives and eighteen children.